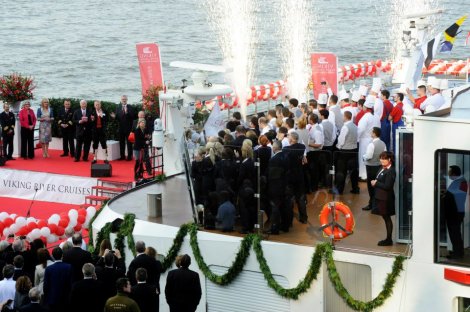 It may have been via part video link up, but all four godmothers of the newest Viking Longships celebrated the christening of their respective ships in Amsterdam and Germany yesterday.

Actor and human rights campaigner Joanna Lumley was announced as godmother to Viking Odin, with the woman famous for her role as Patsy from cult TV show “Absolutely Fabulous” gushing, “I have never been godmother to a god before!”

“I’m absolutely delighted to become the godmother of the wonderful Viking Odin. She’s magnificent! It’s been a fantastic day and I do hope that the Longships will have a long and successful tenure exploring some of the most famous, historic and monumental waterways around the world,” Ms Lumley said at the launch yesterday. 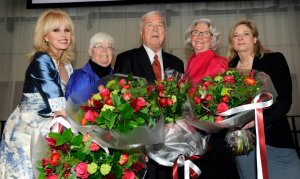 Expected to launch in mid-April, Viking Freya and Viking Njord were still a part of the official celebrations via live video link up following the recent announcement that the two Longships would not be ready to launch at the same time as their sisters as planned.

“As we celebrate our 15th anniversary in 2012, we’re proud to say this is the biggest day in our company’s history,” Viking River Cruises chairman Torstein Hagen said.

“The christening of four new Viking Longships is the first step toward an exciting new horizon in our future. By the end of 2013 we will have launched an unprecedented 12 new Viking Longships in two years and today we are thrilled and honoured to have had such an eminent and sophisticated group of women helping us christen the first four of those vessels.” 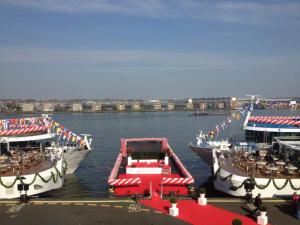 Representing each of the Viking gods that the Longships commemorate, the godmothers were selected based on their contribution to the key pillars of the cruise line’s heritage.

“I’m so honoured, I honestly feel like the Viking staff are part of my family…they care; they truly care,” Ms Wiswedel who has two more Viking cruises booked for later this year said.

With garlands of red and white balloons and special effects, the 600-strong crowd watched as the four godmothers cut four red ribbons and smashed four bottles of Veuve Clicquot against the bow of their Longships.

The ceremony continued into the evening when Viking Odin and Viking Idun sailed to Amsterdam’s Ij Bay where guests attended a celebratory dinner onboard.

Two additional Longships will debut this northern hemisphere summer with six more scheduled for release in 2013.

Click here to view a complete photo gallery of the new Viking Longships.