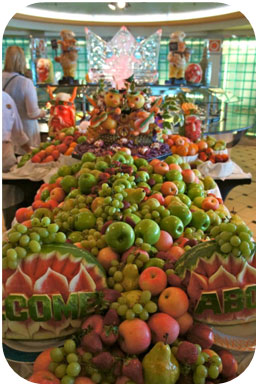 How much can one experience in less than 24-hours aboard a ship so large it houses an ice rink and rock climbing wall? I was going to find out when I boarded Voyager of the Seas for her inaugural one-night taster cruise out of Sydney.

Arriving at the Overseas Passenger Terminal to a line that snaked back to the Museum of Contemporary Art, my first question was, will we actually get on before she departs.

The lines were separated into Suite and Crown & Anchor passengers and general passengers but, everyone seemed to be joining the end rather than investigating the signs at the beginning of the queue.

Escorted on, we discovered that a computer glitch meant that our booking didn’t exist anymore and the Royal Caribbean staff got to working on finding a spare cabin for my cruise buddy and I.

Two hours later, we safely boarded and headed straight to the ‘Windjammer Buffet’ to satisfy our grumbling stomachs.

Sanitisation of the cabins was underway following a Norovirus outbreak on the voyage before us from New Zealand, so, we needed to carry our luggage with us until 4pm.

This made for the somewhat difficult navigation of the buffet but, the size of the dining venue was large enough that it wasn’t too much of an issue. 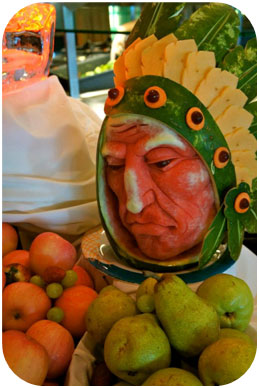 A vast array of food options were on offer including; Italian, salads, burgers, a carvery and, my personal favourite, the Mongolian stir fry station that whipped up fresh noodles to your preference.

Cocktails in hand and stomachs satisfied, we headed to the pool where a few were braving the overcast elements to hit the water ahead of the emergency drill.

Keen to sample some mini golf but needing to refrain as our luggage was not the easiest to cart around, a relaxing afternoon catching up with friends, old and new, was the name of the game for this cruiser.

Emergency drill complete (ever thankful that we weren’t required to don life jackets as you do aboard some ships), we headed to Studio B for a special cocktail party and exclusive ice show.

When even the ship’s captain takes to the ice, you know you’re in for a special treat.

The performance attracted many gasps of glee and surprise as the international ice troupe dazzled the audience with amazing feats both on the ice and in the air.

For someone who grips onto the side of an ice rink for dear life, the performance was truly remarkable and, whilst I was tempted to sample the ice rink later that night when it opened for passengers, I just had to resign myself to the fact that there was no way I could slice as gracefully across the ice as that talented group of 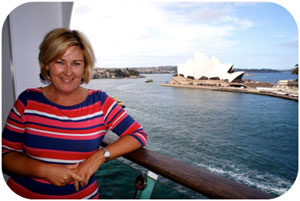 Cruising buddy Kylie enjoys the view from our balcony

A balmy evening meant that a pre-dinner mai tai was in order at the pool bar. We joined friends to watch the sun set over Sydney Harbour before heading to the ‘Carmen’ dining room.

An entree of miniature scallops made way for my ravioli main, but, there was no time for what looked like a delectable dessert offering unfortunately, as the Dreamworks characters were set to parade across the Royal Promenade and there was no way I was going to miss that.

Passengers lined the Promenade as characters including; Alex and the Penguins from Madagascar, Shrek, Fiona and Po ‘Kung Fu’ Panda danced their way down the deck, greeting passengers and posing for pictures at every opportunity. 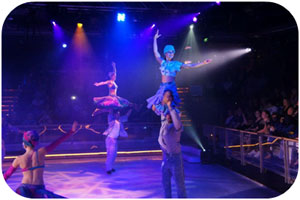 The international ice troupe takes to the rink

With only a few hours aboard the ship, it was imperative we experienced as many places as we could and, having seen someone carrying a distinctive pink cake box that could only mean the ‘Cupcake Cupboard’ was open, we had to head straight there.

Unfortunately, everyone else aboard Voyager seemed to have the same idea, as they had sold out of cupcakes, but, we were able to do a spot of Christmas shopping and, bags loaded, we headed to the Royal Promenade shops…to see what other souvenirs we could pick up.

Distracted by the music and cheering in the ‘Schooner Bar’, a coconut blast cocktail was in order as we nabbed the final two seats to hear the talented Ed Manego croon his way through the evening. 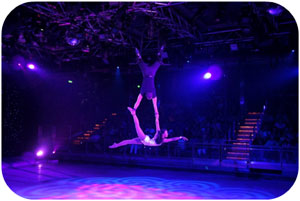 Having sailed aboard Voyager’s sister ship, Navigator of the Seas, last year, I knew that the ‘Schooner Bar’ was usually one of the calmer bars to frequent…not this time however!

Ed sang hit after hit as the crowd went wild and begged for more. Passengers danced in every space they could find and request after request was sent across the piano in the hope that he’d play “their song” next.

The 70’s party had nothing on the ‘Schooner Bar’, but, we had to check it out of course and shook our groove thang as the entertainment staff donned afros and the ‘almost’ Village People showed us what their mama gave them. 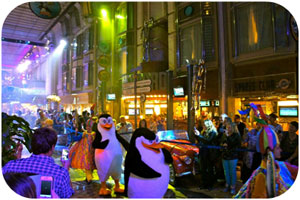 The Madagascar Penguins get the party started at the Dreamworks parade

Two-decks ensured that there was enough room for dancing and mingling, regardless of it being a full ship.

DJ Rob spun tunes from across the decades and the dance floor was filled until the wee hours of the morning, when this cruiser decided to check out whether we were actually sailing and hit the deck for a stroll before bed.