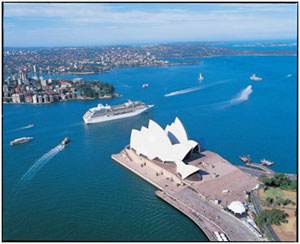 Princess Cruises is celebrating ten years of cruising in Australian waters with six of their ships heading down under during summer.

The 30,000 tonne Pacific Princess was the youngest ship to ever sail out of Sydney Harbour on 18 November 2002 and led the way for the cruise line to deploy their first ship year-round in 2007.

The 1,900-passenger Sun Princess was joined by her sister Dawn Princess in 2008, enabling Princess Cruises’ to offer the first ever year-round world cruises from Australia.

“We now have scores of cruises sailing from Sydney, Brisbane, Melbourne and Fremantle each year carrying tens of thousands of Australians on cruises to New Zealand, the Pacific and round the world.

“We are delighted to have been the consummate host in the Australian market for the past decade.”

Dawn Princess, Sun Princess and Sea Princess are currently based year-round in Australia, with the 116,000-tonne Diamond Princess adding to the deployment this summer for a season of voyages to New Zealand.

Pacific Princess and Ocean Princess will also head down under for what is slated to be the largest season in Australian cruising history.