The master of ultra-luxury cruise ship Crystal Serenityspoke to e-Travel Blackboard in Sorrento, Italy earlier this year and shared his favourite ports and what the Crystal difference is all about.

Natalie: How long have you been with Crystal Cruises?

Natalie: Where were you working prior to that?

Captain Økland: I was 19 years with Royal Viking Line. And then Royal Viking was divided, you know, so then lucky I knew somebody working for Crystal.

A lot of people from Royal Viking went over to Crystal when they started up.

Natalie: There are so many different aspects to your position, but what is it that makes you wake up in the morning and say, “Wow! This is what I love most about my job”?

Captain Økland: Well, you know, there are so many things on a cruise ship…

And of course dealing with the guests is very nice; you meet a lot of nice persons actually on the cruise ships.

We have one of the best crew afloat onboard Crystal Serenity and Crystal Symphony so that’s a good team to stay with after years, you know…it makes a big difference actually.

We have a lot of repeating guests very often coming back again…I think the highest number now is 270, or something like that.

She just left us now in Bora Bora for the world cruise and she’ll be onboard for a while and then she’ll go onboard Symphony! 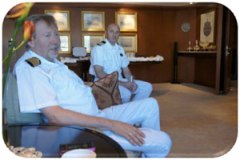 Natalie: You mentioned that one of the things you love most about your job is sailing into ports like this. What are your top three favourite ports to sail into?

Captain Økland: I’ve sailed many times into San Francisco and that is one of my favourites…sailing under the Golden Gate there is really fantastic.

And I have to mention Sydney!

And the third one should be… well, should I mention my home port? It would be Bergen in Norway.

Natalie: Do you get much time off the ship?

Captain Økland: Yes, you know lately, we have many overnights, as you know…like in Venice.
At some ports we actually have two overnights!

But when the ship is at anchor, like here, I like most of the time to be on the ship.

Natalie: Who would be the most famous person you’ve had onboard whilst you’ve been master of the vessel?

Captain Økland: We had Elizabeth Taylor on theWorldwide Star, on the China cruise. I think I was staff guard at that time…

Natalie: Is there any particular special treatment for passengers like Elizabeth Taylor?

Captain Økland: I think they like to be incognito, you know and not make too much of a fuss.

But usually they come up to the bridge, say hello and maybe have a little party.

Natalie: I’ve noticed that, on this cruise in particular, the passengers are a lot younger than I personally expected. Have you found that your demographic has shifted recently?

Captain Økland: It has a lot to do with the season.

In the summer we have quite a lot of younger people aboard.

Very young some of them – we had one hundred or so under eighteen!

But I think it’s actually a trend right now, yes, that we have younger groups coming aboard and taking Crystal Cruises.

But for long cruises, world cruises you know, we still have an older crowd.

With internet and everything, people can go and still do some business…but three months is a long time away from doing business!