This week, Norwegian Sky’s Captain Ron Chrastina shares his favourite travel destinations and his ambitions to cycle competitively, when he took time out of captaining the ship to speak to e-Travel Blackboard in the Bahamas earlier this year.

Natalie: What’s your favorite thing about your job?

Captain Ron: My favorite part of everyday really, is the time that we spend on the bridge maneuvering the ship because that is as true to what a Captain is meant to be a part of, it’s the hands on part.

Training other people to ensure that their skills are at a point where you almost don’t even have to look at what they’re doing and you have this kind of confidence that everything is going to be ok because they’re skilled at what they do.

I wasn’t like that, I had to build my skills to the best of my ability and some days you’re the one with more experience than the others.

It’s still the part of the day where you can get the blood pumping a little bit; you’ve got to be really on it.

I think a very close second is just talking to people and meeting people.

If you’re not good at that I think it can’t be very easy to work in this business.

Like it or not, everybody’s looking to meet the Captain and I know it’s not me they want to meet it’s just these shoulder boards.

I know that, it’s just life. 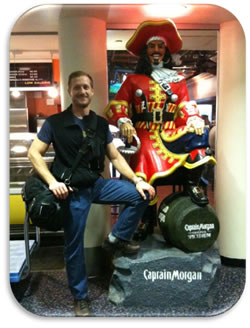 Natalie: Is there anyone in particular in the cruise industry that you see as a role model?

It’s difficult to say, but in terms of people that I’ve been working with, let’s say in this company in the last almost ten years…there’s one gentleman who just retired and he was one of the Captains on Pride of America.

He was a retired Navy Captain actually, he was a pilot and he had a license for sailing ships because he graduated from Texas University which has a maritime program.

He had worked his way up after he got out of the Navy from base level with his license and got to the point where he was Sailing Captain and he loved it.

He is a very matter of fact gentleman, very by-the-book, by-the-rules.

Very much about making the guest experience what it’s supposed to be, about making sure that people are having a good time, that quality is number one and being maintained.

He was everywhere, always involved in things and we sometimes would even lock horns because we were a lot alike.

That’s not all of me but that’s with my military background as well with school stuff that was drilled into my head.

We’re a lot more similar than we are different.

Natalie: Who is the most famous person you have ever had sail aboard a cruise ship you have been working on?

He was on the Semester at Sea on the Universe Explorer in South Africa and he was a guest.

In some place in my volume of pictures I have a photo of him just sitting in one of our lounges and he was talking to the students!

Natalie: When you do get your vacation time, where do you like to go? I wouldn’t imagine you’d be taking a cruise!

Captain Ron: I should, so many people would kill to do it and I don’t take advantage of it enough even in my own company.

Natalie: Do you go cruising?

Captain Ron: I haven’t in a while, the last time I cruised as a passenger was in 2007 on the Norwegian Wind. 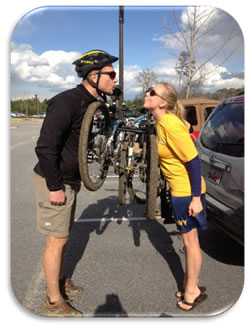 Natalie: You should cruise on Breakaway next year!

Captain Ron: I should that would be a lot of fun!

In the last two vacations I’ve spent a lot of time around my home in South Carolina cycling.

I embraced something that I loved as a kid, just road biking with a club at home and I’m kind of the lead guy for the club.

The fellow who owns the two bike shops that it’s based out of, he’s just a few years older than I am. He’s very passionate about cycling, been doing it all his life.

He is very anxious to have me racing with him; he apparently sees something about my ability, technique or something that I just need to keep building on to actually make something of it.

I’ve been putting a lot of focus on that the last couple of vacations and, with the idea of when I go home this time hopefully, if all goes well, having the chance to do a couple of races and at least complete them…I don’t have to win.

My fiancée and I, we’ve been to Arizona and out to the Grand Canyon.

She’s just taken up mountain biking which we might be able to start doing a little bit more of once we’ve explored things.

We like to visit our friends in South Florida.

We will probably be spending a bit more time in North Carolina out in the mountains because we just came back from there and she really likes it.

Visiting family…we need to focus on seeing a bit more of the United States, because at this point I’m still fairly certain I’ve seen more of the world than I have seen of the U.S. and I mean really see it, not just travel through but experience it.

I’ve missed out on a lot of it because my parents used to live on the east coast, so our vacations were pretty much along the east coast…some place you could drive to.

I’ve seen a lot of cool stuff, but there is a lot more to see.

Usually the first week is sleeping, but outside of that it’s just trying to enjoy myself.