One of my favourite nights on a cruise is formal night. That time of the cruise where even the guy normally wearing stubbies by the pool scrubs up and wears a polo shirt.

Of course the length people go to with their attire varies from ship to ship, but it’s quite nice to have the choice to don a pretty dress and convince your man to shave and pop on a suit…any excuse really! 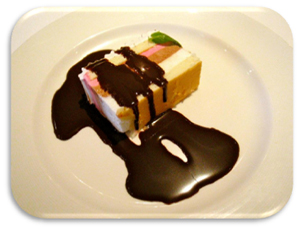 My first time cruiser was feeling much better by this point and we decided (a first for me) to work our way around the ship to strike a pose for the photographers.

The backdrops were great! From the staircase of theTitanic, to the Pacific Pearl docked at a South Pacific island, we were guided by the photographers through some generic poses but, some of them let us go a bit crazy and showcase our personality more which was definitely a plus with two very outgoing girls!

We shared a lovely dinner at the ‘Waterfront’ dining room with our new friends John and Adrienne and my first time cruiser finally got to enjoy a full meal onboard.

Baked Alaska was on the menu, so there was no way I was going to miss out on dessert tonight! The layers of ice cream with the meringue outer shell is always a divine option when sailing and I was looking forward to seeing the dessert paraded by the dining staff later that evening at the ‘Champagne Waterfall Party’.

A fabulous tradition on formal night when sailing with P&O, the champagne waterfall is no mean feat, especially when being constructed aboard a ship crossing one of the roughest passages in inclement weather!

Even head maître’d, Rossen, seemed nervous when he spoke to us at dinner!

The evening’s entertainment was so popular, that it was a challenge to obtain

a seat, but it was well worth it when the angelic voices of ‘La Forza’ took to stage.

Chris, Paul and Cole made up the pop opera group who performed a range of operatic versions of songs by artists including Michael Buble, Josh Groban and Peter Allen and engaged the audience the entire way through.

‘La Forza’ was so impressive that we decided to watch the second showing as well and purchased a CD which, to be honest, has been on repeat since I returned!

Everyone piled out of the ‘Marquee’ and headed straight to the atrium where passengers lined the four decks eager for a glimpse of the Baked Alaska parade and the champagne waterfall which, I am happy to report, stayed in position

Cruise director Zoltina-J and maître’d Rossen led the festivities that commenced with a balloon drop before the first bottle of champagne was popped and Pacific Pearl band M.I.T. got the party started.

The atmosphere was electric and bar staff wandered through the crowd offering complimentary champagne to guests as they turned each deck into a dance floor. 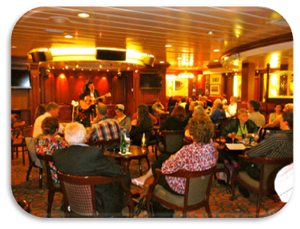 DJ Cowboy was spinning the decks in the Dome for the late night party and it was great to see the largest turn out yet in the deck 14 nightclub.

My first time cruiser and I had prime seats and carved up the dance floor on the calmest evening yet on our trip.

We made new friends and even started the ‘Bus Stop’ at one point, transforming the crowd of dancers into a group of performers that I think would have felt at home on the set of ‘Saturday Night Fever’.

Now this is what I love about cruising…if only we weren’t disembarking in two days!