The heat was palpable on arrival into Dubrovnik and I was glad that I had booked the ‘Best of Dubrovnik’ shore excursion rather than relying on just wandering around on my own.

Michelle and I boarded the air conditioned coach and we headed through the countryside to a local restaurant in Konavle where we enjoyed some Croatian wine and food.

The restaurant ran alongside a bubbling brook and provided cool comfort for our group…I felt like I had walked into a fairy tale with the costumed waitresses and water wheel.

Cavtat was our next stop, the picturesque seaside town that had an almost Bodrum-like feel to it with its yachts, bars, restaurants and turquoise blue water.

Thirty minutes just wasn’t enough time to savour the beauty of this village and all I craved the chance to sit at one of the stylish waterfront restaurants and enjoy a cocktail in the shade before boarding one of the many yachts for an afternoon of cruising.

It always does come back to being on a water vessel of some sort with me doesn’t it?

Back on the bus, we head to the Old City where our tour ended quite surprisingly. Perhaps I should have chosen a more interactive tour, as the “sitting on a coach listening to a tour guide for several hours” option really wasn’t appealing to me anymore after almost a month of being in Europe.

This tour didn’t live up to its expectations at all and the section of the trip where I truly did want guidance was the Old Town which we now had to walk through on our own. 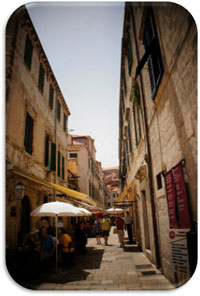 The UNESCO World Heritage site provides the perfect example of a late-medieval walled city and has truly withstood the tests of time having survived an earthquake in 1667 and armed conflict in the 1990s.

It is possible to still find bullets and bullet holes in the walls that line the city from the war, a disturbing reminder of how resilient the Croatians are.

Gothic, Renaissance and Baroque churches fill the site that is peppered with restaurants, stores and fountains.

Initially keen to “walk the wall” the heat truly was overwhelming and Michelle and I decide to head back to the ship via one of the many shuttle buses provided by Carnival. The added bonus for us was that it was free of charge because we had booked a tour, it was only about 5 euros otherwise.

Cant’t use chopsticks? How about
a chork at Bonsai Sushi?

It was time for this girl to truly relax and, following lunch of…you guessed it…a Guy Fieri burger, I lay by the pool and enjoyed a nap before giving Bonsai Sushi another chance for dinner.

This time around, whilst we waited 40 minutes for our green tea to be served, we mentioned that we had plans that we had to adhere to and didn’t have three hours for dinner like last time.

As soon as this was mentioned, our meals arrived…at the same time…and our waitress said that, in future, should we wish to eat quickly, all we need to do is tell them beforehand.

I’m unsure as to why this is a requirement as I can’t imagine people want to wait hours to be served but I took the advice on board just in case another sushi craving hit whilst aboard Carnival Breeze.

One thing was certain, the sushi was great…beyond great actually…so maybe the wait was worth it!