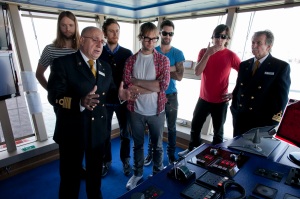 Known for chart-topping hits including “Moves Like Jagger”, “This Love” and “She Will Be Loved”, Maroon 5 spent time onboard inspecting the Bridge and ‘Red Frog Pub’ before performing to a crowd of more than 4,000.

“We’re thrilled to celebrate the Carnival Magic’s arrives with a Texas-sized performance by Maroon 5, one of the country’s most popular bands.”

The 3,690-passenger ship completed a transatlantic voyage to arrive at her new year-round homeport ready to join sister ship Carnival Triumph and become a part of the largest-ever capacity commitment by a cruise line in Texas.

More than 450,000 passengers are expected to travel annually out of Galveston, Texas in 2012 with Carnival Cruise Lines, representing a 28 per cent increase over 2011.

One response to “The one where Maroon 5 rocked Carnival Magic…”