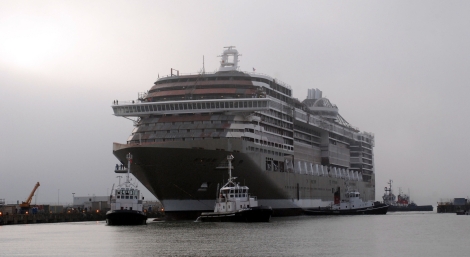 The third in MSC Cruises’ Fantasia class, Divina was floated out of dry dock B at the STX Europe ship yard in Saint-Nazaire, France on 3 September.

Towed by eight tug boats through the Loire estuary to dock C for final fitting and furnishing, the 4,363 passenger ship will be christened in Marseille on 26 May 2012 by godmother Sophia Loren.

“Today marks the start of the final one million hours of work devoted to meticulously applying the finishing touches to ensure our new ‘débutante’ is ready and perfectly ‘dressed up’ when she emerges for her debut ‘Grand Ball’ on 26 May 2012 in Marseille, France.”

MSC Divina will take the stage as the first in the line’s fleet to be christened in France.

Hinting that she will be themed as a ‘divine goddess’, MSC announced that the ship’s 18 decks will be named in Italian after gods of ancient Greece.

With 1,751 staterooms, 100 more than her sisters Fantasia and Splendida, she will also feature an aft ‘Garden Pool’ which will be designed as an adult exclusive area.

“We forecast a rush of bookings for a cabin aboard the new flagship which will operate on a series of cruises of the Mediterranean in its first year. It’s exciting times not only for MSC Cruises but also for cruise fans from our corner of the world,” said Lynne Clarke, managing director of MSC Cruises Australia and New Zealand.

Construction has also commenced on what MSC Cruises is dubbing Project X32. Cruise Community reported that steel has been cut and the hull is at an advanced level.

The line is currently searching for a buyer and expects delivery as early as December 2012.