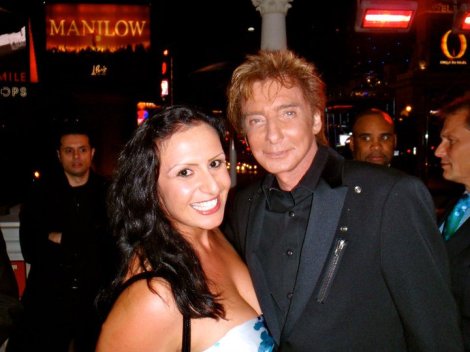 Las Vegas is known for its headline acts and a visit to ‘Sin City’ wouldn’t be complete without seeing one of the many legends who perform there.

I’ve always said that I was born in the wrong era with the style of music that I enjoy and this was perhaps proven by the entertainer I decided to see whilst in town.

Now Barry and I go way back. I remember being given one of his albums on cassette when I was much younger and falling in love with the song ‘Copacabana’. I knew every word (still do) and even sang it at a school talent quest!

I may not have won…but I was word perfect and really belted that story of Lola’s demise with passion!

Barry Manilow was performing at Paris Las Vegas and I was lucky enough to be seated in the fourth row dead centre, the perfect position to be transported through a journey of Barry’s life and music.

He is a true storyteller in every sense of the word, and can certainly belt out a tune. The crowd went wild and when my song came on just before the end of the concert, I sang it like I’ve never sung it before!

My rendezvous with Barry wouldn’t end there though.

Paris Las Vegas is home to the infamous and recently relaunched Chateau Nightclub.

What better way to remind myself of my true age and strap on those dancing shoes again?

Barry, it seems, had the same idea.

Flanked by burly security guards, he and his band took up residence in a cabana in the ‘Chateau Beer Garden’ overlooking the Strip…right next to me!

Having had such success utilising my Australian accent to meet celebrities whilst in LA earlier in the week, I thought I’d give it a ‘crack’ and try and meet the legend in person.

Security wasn’t too keen on me getting close but, after explaining I had come from Sydney and had loved the concert, they said that they would ask Barry whether he was happy to meet me.

The security guards parted like the red sea and there he was in all of his fresh faced glory ready and willing to talk to me!

Oh how we chatted…we spoke of his cancelled Australian tour, my passion for ‘Copacabana’, my love of his music possibly being a genetic trait passed on from my mother, how utterly brilliant his concert was and how much he loves Sydney.

I may have scared him off meeting any other fans though, because security closed in on him right after our friendly banter. They did, however, take a photo to capture the special moment…

Only in Las Vegas!