From the moment I step off the plane into the balmy Honolulu air I felt like I was home.Will and the team from Duck Tours await my arrival, lei in hands, to welcome me to Hawaii, where I would spend a week exploring the culture and music of the islands that had captured my heart several years ago.

Another lei at Hilton Hawaiian Village cemented my feeling of hau’oli (happiness) to be back.

majestically over the ocean.

My Pele talisman has returned to Hawaii with me and she hangs around my neck proudly in a show of strength, happy to have returned to the Islands where her mana (spirit) is strongest.

My mana, on the other hand, was telling me to head to the pool I would come to dub ‘Elvis central’ at the resort. The Tapa Pool was where many Elvis fans had gathered to sun themselves whilst listening to Elvis music as part of the celebrations for the 40th anniversary of the “Elvis Aloha From Hawaii” concert.

The Chapel at The Willows

Old Elvii, young Elvii and Japanese Elvii peppered the pool with many singing along to some of his greatest hits, whilst others prepared in the Tapa Bar to enjoy hearing Andy Childs do his best tribute to The King instead.

My jetlagged body was after something a little more placid though, so the beach was my venue of choice for the rest of the afternoon. Laying my towel in the sand, I savour a sushi box from ‘grab and go’ eatery Pronto Pickle and sit in the sun that thankfully must have forgotten it is actually winter.

Languishing on the private beach with the many families who spend

Tracy from Poi Planet relishes in the delectable Hawaiian fare

their well-earned vacations at this fully self contained resort, I am tempted to build sandcastles with some children nearby but, doze off instead, in preparation for my first evening of Hawaiian music and culture. Sugi from Duck Tours collects our group from the porte-cochère at the resort and we head to The Willows where popular band Maunalua would be our entertainment for the evening.

The lush garden restaurant is located in Moili’ili approximately a 10 minute drive from Waikiki and is a gem in what seems like suburbia.

Originally the property of Kamamalu, the Queen consort and wife of King Kamehameha II, The Willows became well known in the early 1940s for showcasing the best of the best in Hawaiian music.

Keeping up that tradition, the property is now home to Pakele Live every Thursday evening, which celebrates the culture and music of the Islands with a different live band every week complete with hula dancer. 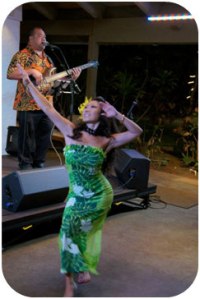 What music performance would be complete without a beautiful hula dancer?

Hosted by the talented composer/musician/producer Pali Ka’aihue, the award winning series is broadcast on television and streamed over the internet, with Maunalua providing the perfect backing music to our first evening in Hawaii.

A buffet offering a myriad of local delights calls my name and I try to be adventurous by piling such delicacies on my plate as the succulent Kalua pig, but am tempted (as always) by the fresh sushi on offer as well.

The coconut-based haupia and a pina colada bread and butter pudding provides the perfect nightcap for this wannabe hula girl before returning to the resort.