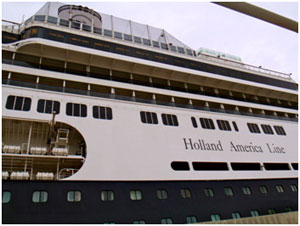 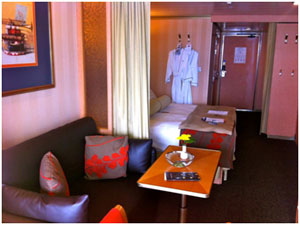 I finally made it through security and, since my cab was not allowed to deliver me through to the actual cruise terminal, I embarked on my first voyage…the attempt to navigate the Port of Melbourne! 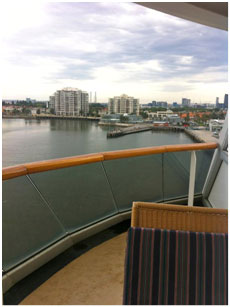 With little direction and a lack of port staff to assist passengers, I finally manage to board the ship and the mantra that runs on repeat through my head is “Sydney doesn’t have it so bad after all!”

As well expected, the staff that greet me onboard are friendly and professional and excitement wells for my impending virgin voyage on a Holland America Line ship.

Knowing that I have a verandah 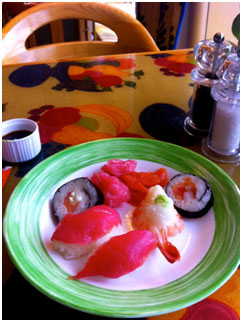 suite for the very first time in my cruising history, makes my walk to the aft end of the ship even more exciting and I head to deck 6 to settle in.

My steward Dewa welcomes me and I open the door to see a cabin so spacious and well appointed that I seriously consider never leaving it for the duration of my voyage! 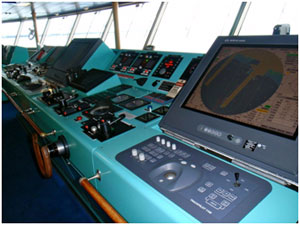 With a bathroom almost larger than my one at home, a king size bed and lounge area that leads onto the supersized pseudo wraparound balcony, to say I was breath taken would be an understatement. 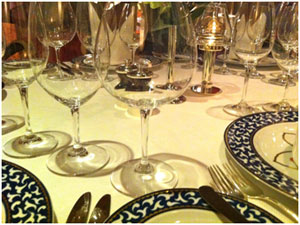 and table were positioned on my balcony which curved around to the back of the ship and I knew I would, most likely, spend a vast amount of my voyage there. 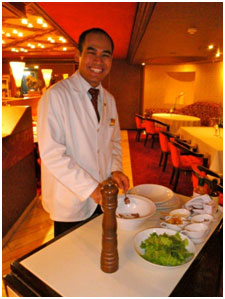 that night but, one thing that was open was the Lido Buffet and I was more than a bit peckish!

Digging into a feast of sushi and sashimi was not what I expected at a buffet, but the quality was just as high as any Japanese restaurant I have frequented so there was no need to move on and sample any of the other international delicacies on offer! 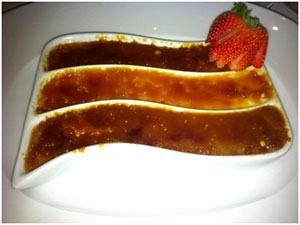 colada before a tour of the Bridge.

Experiencing the control room of a ship is an exhilarating feeling and such an honour with Holland America Line seldom offering tours of the area post 9-11.

Third Officer Becky takes us through operations on the Bridge before we head to the ‘Pinnacle Grill’ for a delectable dinner with Hotel Manager, Henk Mensink.

When you step into a restaurant and the crockery is Bulgari, you know you’re in for a treat.

With our Villa Maria Sauvignon Blanc poured by Amsterdam’s Cellar Master, Matt (who was actually a winemaker at that very vineyard) we are able to peruse the menu and try to decide between the multitude of fine dining options on offer.

The choice is supremely difficult and I eventually decide on an ocean platter to start, followed by lobster macaroni and cheese (who would have thought I’d ever see that on a fine dining menu) followed by a crème brûlée trio of mocha, vanilla and chocolate.
From the white glove service to the ever present smiles, it’s no wonder the Pinnacle Grill is one of the most popular venues onboard Amsterdam.

I need a long walk around the ship after that amazing food but, beforehand we head to the ‘Queen’s Lounge’ to watch the Indonesian crew perform in a talent show much to the delight of the passengers who have become very close to the crew after sailing with them for 45 days.

Word is that the ‘Queen’s Lounge’ has never been that crowded this voyage with standing room only available for the passengers cheering on their crew as if they were their children. It was a sight to behold with the roar of applause audible well outside the theatre.

With this cruise being an older demographic, the crowds dissipated soon after the performance with everyone retiring relatively early after a big day in Melbourne.

I sat on my balcony watching the lightning storm over the city we sailed away…Sydney bound.