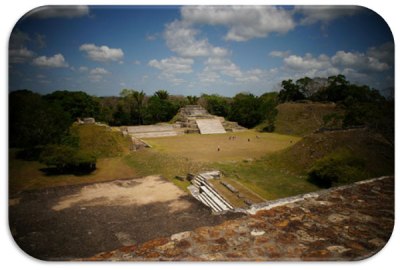 The view from atop the Temple of the Masonry Altars 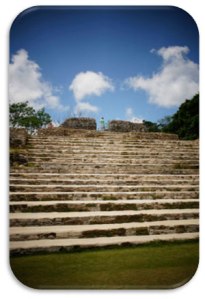 Having spent so much time working on my tan on tropical islands over the past week, I thought it was about time my cultural-self got a work out.

Belize was our next port of call and is most famous for the archarchaeological site Altun Ha, that houses Mayan temples believed to date back to 100AD.

Deciding to purchase a tour in port as opposed to through Carnival, my Minnesota friend Del and I boarded the tender to shore more than a little nervous about our ‘risqué’ decision.

The common concern about 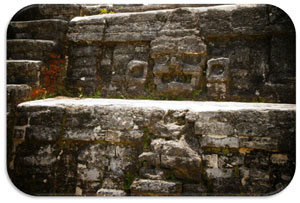 purchasing shore tours yourself is always that you won’t return to the ship on time, thus risking the ship leaving without you or waiting and lobbing you with a hefty fine. 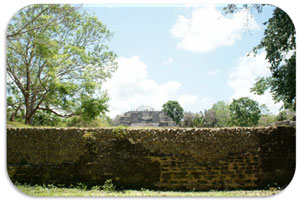 this risk before, I was keen to obtain some advice from a crew member who directed us to the tour desk for a company he said was reputable and, most importantly, affordable. 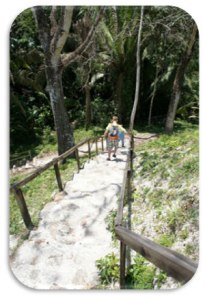 What goes up…must go down

We selected the rainforest, country and Altun Ha ruins tour that retailed for well over USD$100 onboard but was available for a mere USD$49 in Belize.

With a little time to spare, we check out the wide variety of shops lining the port and I eyed some very convincing knock off designer suitcases that would definitely solve my problem regarding having run out of room in my luggage.

For USD$5, I purchased a back pack that would be my saviour for the day and we stocked up on bottled water ahead of our hour long drive to the ruins.

Perhaps the only negative of purchasing a tour shoreside was the fact that we were travelling in a non-air conditioned and fairly uncomfortable van, but I guess it was all a part of the experience after all. 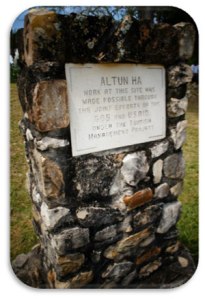 Our driver took us through town and we saw why some passengers were hesitant to wander around the city alone. Dilapidated houses made way for take away food shops that had bars on the windows and doors, allowing a space only for money and food to pass through.

The bumpy, hot ride continued and our guide told us of being a single father and raising two children through the tours that he ran. It’s times like these that you realise the massive impact that travel and tourism has on communities like Belize. 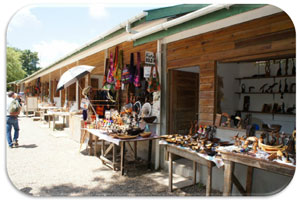 Arriving at Altun Ha, we were pleased to see the coaches from the Carnival organised excursion and, as our guide led us through to the temples, it was clear that he was truly passionate about his Belizian history.

Spanning approximately eight kilometres, the site is believed to have housed 10,000 Mayans in and around the area with the first recorded time of settlement, 250BC and running through to the Classic Period in the 10th Century.

species, our guide showed us how you can live off the fruit and seeds produced by the flora in Altun Ha but my stomach was yearning for a more substantial lunch!

Excavation of the site began in the 1950s and preservation continues to this day with the plazas open at alternating times through the year to ensure the site does not prematurely decay.

Disappointed to see that other guides were not respecting the signs indicating not to climb some of the temples, we did the right thing and proceeded to give those legs a work out by obtaining those priceless photo opportunities at the top of the temples that were ‘open for business’.

In the same way my mind boggled at the skill of the ancient Egyptians when I first encountered the pyramids of Giza, I just couldn’t get my head around how the Mayans were able to construct temples that reached 18 metres high in some cases, if I had difficulty climbing them alone!

Our ancient cultural fix complete, Del breezed into modern culture and excitedly sampled his first ever Coca Cola in a glass bottle before returning to our minibus.

Dubbed ‘the real Coke’, by Mr. Minnesota, I can’t say I have ever seen someone so enamoured by the concept of Coca Cola in a glass bottle!

Managing to nap a while on our return to the port of Belize, I dreamt of “Louis Vuitton” suitcases and managed to snap up what I thought was a bargain after some nifty haggling but discovered later that you get what you pay for when my new “fabulous” suitcase only had one handle.

The trip home with my heavy luggage was going to be even more of a drama now!

Having not indulged in lunch during our tour, we enjoy a Guy Fieri burger before hitting up my favourite specialty dining venue on board, the Sushi Bar!

Located on Deck 6 between the Casino and the Hot & Cool nightclub, the Sushi Bar offers two different types of sushi per day (my favourite was spicy tuna) with condiments and the option to purchase saki or green tea as the perfect accompaniment.

The sushi chefs were delightful and so talented, creating a spectacle of making the sushi fresh in front of passengers. They got very used to my 5:15pm visit every day and knew that they would generally have to prepare several plates to satisfy my sushi craving.

Exhausted by a culture-filled day, my afternoon nap prepared me for the New Orleans Mardi Gras party that started with a shower of beads in the lobby atrium later that night.

Passengers gathered to hear the jazzy sounds of Dan and the show band and joined in a procession through the ship to the Hot & Cool nightclub.

Passing the vintage photographs being offered on Deck 6 I was so tempted to don a bonnet and frilly dress but refrained, selecting instead to hit the dance floor and see whether my talents at ‘popping it’ had improved with practice through the week.

As an added bonus, anyone who wore white received USD$1 off their drinks for the night…I have never seen so many splashes of the “colour” in the nightclub before!

You just have to love a promotion that succeeds like that! Disco ball cocktails all ‘round I say!