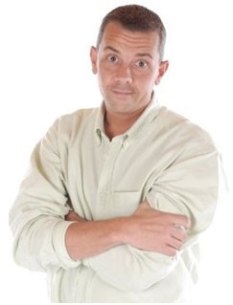 Currently jumping from cruise ship to cruise ship, Steve Caouette talks to Cruise in Review about his start on “The Late Show with David Letterman” and his foray with the legendary Stephen King.

Cruise in Review: How many cruises have you worked on?

Steve: I started in 2007. You know the cruise card you get? I keep them…I don’t know why, but someday I’m going to do something with them…I’ve got a whole stack, it’s probably a foot high now! 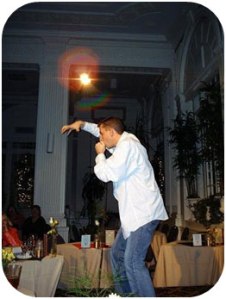 Steve: Oh that’s a tough question…I did the maiden voyage of Oasis of the Seas… so that kind of sits near and dear to me…the big old girl!

Cruise in Review: There are so many ships in America, but have you come down to Australia to do any of our ships, or do you sail in Europe much?

Steve: Celebrity offered me some dates way out in December of 2011 but I’ve been away from home for every year since I

started cruising for Christmas and New Years, so I said, this year I think I really want to be home.

The offer was there, so I think there’s a pretty good chance that I’ll get down!

Cruise in Review: You mentioned in your show that you have a girlfriend. How do you make the relationship work with you being away so much?

Hanging out with the “Today Show’s” Al Roker

Steve: It’s my ex, that shows you how! You can write that down!

It takes a special person to deal with it, that’s for sure!

I have a little boy at home too so it makes it extra hard from me because I’m from New England and my baby lives in Vancouver, Canada.

So when I’m not travelling here, I travel to go see him which is hard.

Cruise in Review: I hear you’ve done some TV work as well?

Steve: When I got out of college, I worked for David Letterman, for “The Late Show”, that was my first job. 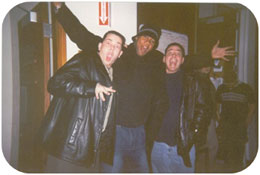 Cruise in Review: That would have been a great gig! What was your role on “The Late Show”?

Steve: I worked there as an intern and then I worked in the research department, which was real fun.

Taking some time out on deck aboard Grand Princess

We worked tandemly with the segment producers and the writers. Then I left there and started working for Stephen King, in the movie business.

I worked on a movie called “Thinner” and “The Langoliers”, which was a miniseries on television.

Then, on a dare, I tried stand up. It was a contest and I won! Then I kept going and then the

Cruise in Review: Do you just work on cruise ships now or do you do stand up on land as well still?

Steve: I work Vegas, Atlantic City, I’ve played at a little over 300 colleges across the United States.
I used to be a real big college act, I used to do that all the time and then I got involved in the cruise ships and my manager thought, “This would be a cool thing to do a couple of times a year,” kind of a nice, paid vacation.

Then the next thing you know, they kept giving me more and more dates and, I’m easy man, I just say yes to everybody!

They give me a nice room, they treat me really well and they’re very fair, they take care of all our flights and everything.

If you do the math, I started 2007 when economically things started to go down real fast on land, we were watching bars and stuff that used to always have comedy go right down the tubes, so, this was something nice to have as extra.

Cruise in Review: This is one of the few industries that boomed during the GFC!

Steve: Exactly! It’s also an industry that, when I started out I was thinking, it’s like the airline industry; it’s so big, they can’t afford to let it go down.

So it was a good place to get involved. It’s funny that you have to go out to sea to get solid footing. You know, to make sure that you’re stable.

I’ve never been one to keep myself in one realm.

But right now I’m here, and I’m loving it. And we’ve got some TV coming up. I’ve been doing a lot of private stuff, corporates and stuff, so we’ll see where it leads.

Cruise in Review: Do people approach you off-stage when you cruise?

Steve: I think sometimes people get nervous to approach me because they think I’m going to be the same guy as I am on stage and jokingly pick on them. Like, “nice shirt – where’d you win that?” I’m not going to do stuff like that!

Cruise in Review: There are a lot of guest entertainers on ships who “hide” when they’re not working. Do you?

I need people around, or else I’ll go nuts. I can’t stand being in the cabinet, you know, the little cabin. I have to move!

I think that’s why I don’t do it more – I need to get back into reality.

Cruise in Review: You’re constantly getting to meet new people every cruise, is that tough at times?

Steve: Yeah. It’s a frustrating thing because you meet new friends and then all of a sudden they’re gone. So it’s groundhog day!

Cruise in Review: In your career, what would you say has been the pinnacle moment?

Steve: My dad had passed away not long after I started “The Late Show”, so my mum was still pretty wounded you know? He died young…

I remember bringing her to the show months afterwards… brought her into Dave’s office and the crew were so nice to her, they took her all around…that was pretty cool!

It made me feel real good to see that she wasn’t worried anymore, to see that something was developing, that I didn’t take my two college degrees and throw them down the toilet!

Cruise in Review: It’s a huge thing working on a show like that!

Steve: Yeah and it was when they first went to CBS, so they were number one on the ratings, it was big big!

Cruise in Review: What’s your favourite port that you’ve visited?

Steve: St. Maarten. There are things to do and it’s fun! You can walk around and not feel bored to death!

Cruise in Review: So, what does the future hold for you?

Steve: We’re auditioning for the Montreal Comedy Festival, which is the biggest festival on the planet for comedy.