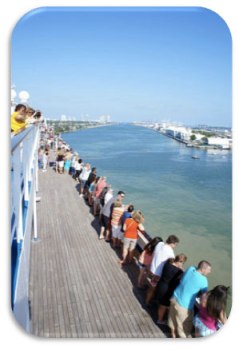 Sailing out of Miami

Boarding Carnival Liberty in Port Miami is an experience to say the least…but the long lines do give me a chance to take advantage of the free WiFi available!

I always take the opportunity when checking in to see what my fellow passengers are like and try and guess who I’ll become friends with by the end of my voyage.

The crowd was much more diverse than I expected.

When I think Carnival Cruise Lines, I think young, party people and this group of people included many families, honeymooning couples and older folk.

The first difference I discover upon checking in, apart from trailing from one long line to another, is the lack of sanitation when boarding.

Other cruise ships I have sailed on are persistently ‘in your face’ with the anti bacterial gel stations and crew spraying your hands everywhere you turn.

Aboard Carnival Liberty this is not the case at all and I found I had to search the decks at times for the sanitation stations.

In saying that though, I found out that the CDC (Centre for Disease Control and Prevention) conducted an impromptu inspection of the ship as we were boarding

(hence the delays) and Carnival Liberty achieved a 100% result! So perhaps the over sanitisation on the other ships I’ve sailed on is overkill!

My cabin wasn’t ready (one of the perils of boarding early) so I headed straight to Lido Deck to experience my first Guy Fieri burger.

Having written about these burgers and salivated at the descriptions other people have used after trying them, I was excited…would they live up to my expectations?

Long answer…that ‘Straight Up’ burger with the special secret sauce was one of the best burgers I have ever tasted in my life.

Such a simple concept but…wow!

I relax on a sun lounge and enjoy the Caribbean beats being spun by DJ Electra. Her booth was up two decks on Deck 11 but you could watch the action live on the big screen above the pool as well.

The Fun Ship 2.0 additions I had experienced since boarding the ship had already impressed me.

There was a great vibe surrounding the pool area with the ‘Blue Iguana Tequila Bar’ and ‘Red Frog Rum Bar’ packed to the brim with passengers getting straight into the cruising spirit.

Keen to check out my cabin on Deck Two, I head downstairs and am pleased to find cabin 2271 conveniently located mid-ship just below the lobby and guest services area.

Another thing I had already discovered aboardCarnival Liberty was that things take a little while to find with a maze like layout rather than the straight deck plans of every other ship I have sailed on. 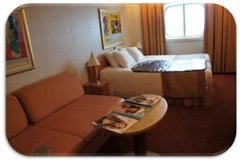 An ocean view cabin, my home for the next week, provided enough space for me to store my three suitcases with ease and not even have to step over them to get to my large and ultra comfy bed.

Little sleep for the past month meant that a nap was in order and I curled up until it was time to muster.

A somewhat arduous process, the mustering aboardCarnival Liberty ran longer than many other ships I have sailed on before, but, apart from a few complaining passengers, was fairly pain free.

A humourous side to the experience was the two wedding parties who had to interrupt their celebrations to muster decked out in bridal garb. The cheers that erupted would definitely make theirs a wedding day to remember!

Heading to the bar for a welcome cocktail I make my first friends, Sandie and Larry from Southern California and Josh and Del from Minnesota. These folks are so welcoming and we spend some time together not only getting to know each other but expanding our group exponentially at a very impressive pace.

New friends in tow, I feel comfortable to explore the ship and the Lido Buffet is our dining venue of choice.

Sunset on day one

A limited selection has me yearning for more food and I was surprised to find that ‘Guy’s Burger Joint’ and the ‘Blue Iguana Cantina’ are only open during the day.

Regardless, we tuck into our meals and head to acquaint ourselves with the many bars on offer before taking to the dance floor at the ‘Hot & Cool’ nightclub.

The dancing competition is on and we find a Run DMC-style dance-off between a New Yorker and a Georgian on to win the famed Carnival Liberty trophy.

Whilst the trophy was enticing, I thought I might save my moves for the dance floor a little later on.

Unless they were competing in the “Cha Cha Slide” or “Cupid Shuffle”, there was no way this first time fun ship passenger was taking on the smooth moves of her new friends…not yet anyway!