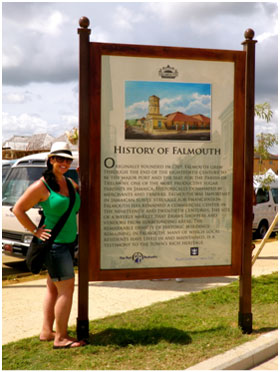 It’s always an exciting  time when a new port opens but it’s been a while since one has generated as  much of a response as Falmouth, Jamaica has.

Royal Caribbean  International along with the Jamaican Port Authority, have invested $221  million to construct the purpose built port to accommodate their Oasis class  ships and offer passengers a unique experience on disembarkation.

The first thematic port  within the region, Historic Falmouth aims to transport people back in time to  1769 when the British ruled and everyone aimed to be “as rich as a Jamaican  plantation owner”.

My excitement to  experience Falmouth grew after speaking with Christopher Wright, business  development manager for the Jamaica Tourist Board and the day had finally come  to see how the construction of the port had progressed.

“It’s almost like going  back in time. It’s a wonderful experience,” Mr Wright shared with me.

Knowing that the port  was approximately 95% complete, I was well aware that there was still a way to  go from the final product that everyone involved was so excited about. The  overriding concern onboard about the safety of the port rang in my ears however.

Having been offline for  a little while whilst travelling around the USA, I was unaware of the media  attention awarded to the area.

Stories of harassment  of cruisers by vendors, drug dealers and prostitutes had hit the internet and there  were more than a few passengers who had made the decision to stay onboard.

Without having read any  of the articles I felt that the situation had most likely been exaggerated.

Cities all around the  world have awful things happen on a daily basis and I was saddened to see that  a small island was baring the brunt of the negative spotlight when everyone was  trying so hard to make this work.

With an open mind I  disembarked the ship and prepared myself to experience Falmouth independently.

A veritable circus of  personalities greeted us, from Rasta men to clowns, pirates to British high  commanders. Whilst quite novel, the overwhelming feeling was that they may have  been trying a tad too hard.

It was like walking  into a carnival with stalls, a mobile ‘Margueritaville’ and fruit stands. All  that was missing was a ferris wheel and some arcade games.

Were they trying to  divert my attention from the line of armed police waiting just outside the  port? 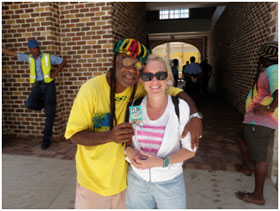 We decided to take the  $10 trolley tour through the city to give us an idea of where we should venture  out for the day. Our guide was a ball of energy and her trainee was so excited  to be a part of the experience.

When our police escort  was ready, we headed through the gates and into what had been portrayed as the  dark and dangerous town of Falmouth.

The locals lined the  streets as we passed by and we were given the opportunity to view some of the  beautiful houses, town halls and churches of which some had retained a classic  Georgian feel. Dilapidated, yes, but you could certainly feel the rich, albeit  young, history surrounding you.

Heading back to the  port, Sherri was keen to partake in some bargain shopping 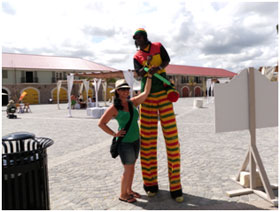 in the local markets  and I decided to join her.

That overwhelming  feeling from Labadee returned.

I wanted to tell  everyone to leave me alone, all I wanted to do was to peruse their wares. The  likelihood was that I would buy from them, not bargain too much and everyone  would walk away happy.

I didn’t want to be  told I was pretty, nor did I want to hold their hand and have sweet nothings  whispered to me, I just wanted to shop!

This is the island way  though. Nothing new, nothing different from any other island I’ve experienced.  Is it annoying? Yes, intensely. Does it give you a feeling 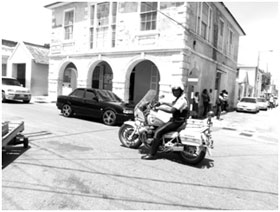 of being in danger?  No, not particularly.

What was most  disconcerting was the show of armed police and military. As Captain Patrik  Dahlgren said to me though, isn’t it better to have them there than not?

As an Australian, that  was what was most confronting for me. I feel the same when I travel to the  Middle East though and I return whenever I can with a vigour. It’s just  different to what I’m used to and also very different to what I like.

So, I headed back to  the ship…with a few more kilograms for my suitcase, having experienced Jamaica  for the first time. 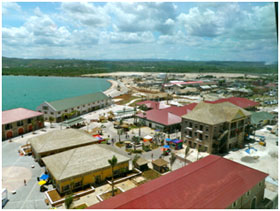 Next time, I’ll book a shore  tour and, whilst it isn’t number one on my favourite ports, I’m very interested  to see how it progresses over the coming months.