My favourite thing  about cruising are the days spent at sea. You can choose to be a joiner like me  or do as little as you like.

Each night before going  to bed, I study the newsletter (in this case the Cruise Compass) and highlight  what I’ll be doing the next day. It may be a little obsessive compulsive but  there are just so many things to do, I don’t want to miss out!

Luckily, my travelling  companion, Sherri, is as fastidious as I am about this and it’s given us the  opportunity to know where to find one another if we veer off and do our own  thing.

The Cruise Compass, or  as I like to call it, my bible, is very nifty onboard 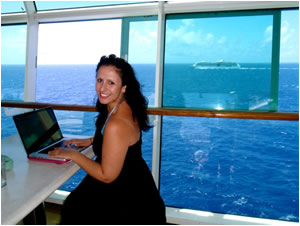 Navigator of the Seas  with a summary of everything on offer along with restaurant opening hours on the  back page.

This is perforated to  make life easier and has been designed to tear off and place in your pocket or  bag without the bulk of folding the entire document. Such a fabulous idea for  someone who wants to do numerous activities but rarely carries a bag onboard!

I set up my ‘office’  poolside to experience the numerous activities arranged by cruise staff and  excitedly watched the race between Jewel of the Seas (heading to Aruba) and  Navigator as Captain Patrik Dahlgren updated passengers along the way. 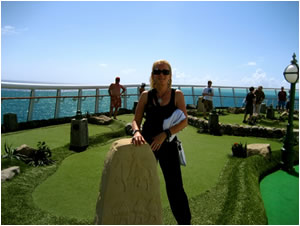 Seeing a ship so close  by in open water is something I’ve never experienced before!

From the Men’s  International Belly Flop competition to the Miss Biceps competition, all bases  were covered for a hilarious afternoon and the winners of each wore their  medals with honour for the rest of the evening!

With wi-fi only  available in some areas of the ship, I headed to the Sports Deck on Level 14.  Miniature Golf and an Inline Skating area feature here along with the trademark  Royal Caribbean Rock Climbing Wall and with the weather so picture perfect,  passengers were lining up to take part in the activities available. 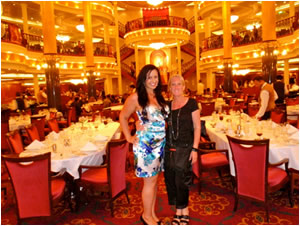 A sport that is quite  unusual for this Sydneysider is Dodgeball. The competition was fierce on the  sports deck and teams were lining up to compete in a sport that I quite frankly  just don’t really understand!

Men and women aiming a  ball at their opponents to weed out the weakest and slowest is not something  that I would ever take part in, but it did make for some amusing viewing!

All rowdiness was put  aside and formal night ensured that the ship came alive with a touch of  elegance. 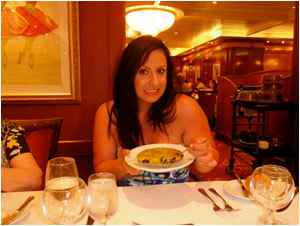 become models for an evening with formal  photo stations set up around the ship.

Held on the Royal  Promenade, passengers indulged in complimentary champagne before heading to one  of the many bars for a night of dancing…or checking out one of several shows  on board.

Sherri and I were keen  for a laugh so we headed to the Metropolis Theatre on Deck 3, which was  conveniently located right near our cabin, to be transported to a world of  humour by comedian extraordinaire Steve Caouette. 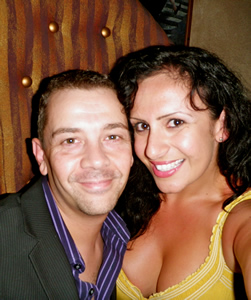 here for burning off most  of my indulgent dinner!

With a varied and  extensive biography, Steve interacts with the audience to create a show that is  unique every time.

Having worked with  comedic greats like David Letterman, he was a refreshing change to the other  comedians I’ve seen onboard cruise liners…and was much younger too!

That’s the thing about  Royal Caribbean, they veer away from the norm and not only boast the youngest  ever Captain of a ship but also feature young performers and staff from around  the world.

On a mission to burn  more calories, I headed straight back to The Dungeon after my very good job of  trialling mostly everything on the extensive menu at The Nutcracker Dining  Room.

Note to self…just  because you can order everything on the menu, doesn’t mean you 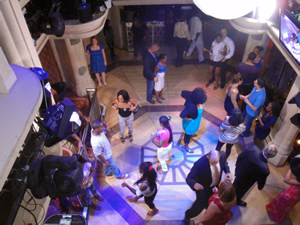 One thing that was clear was that the only way I  would be able to look decent in a bikini before Labadee was to hit the dance  floor and ‘Cha Cha Slide’ that escargot away!