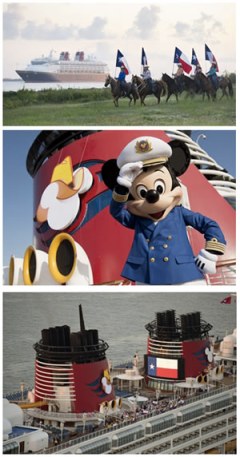 The ‘Lone Star State’ was saluted in a unique way when Disney Magic sailed into Galveston for the first time on the weekend.

The iconic Mickey Mouse ears on the ship’s funnel donned a cowboy hat in tribute to the state that will house Disney Magic as she sails on a variety of four-, six-, seven-, and eight-night Caribbean and Bahamian itineraries.

Captain Robert Olmer and his senior officers welcomed local port officials and community leaders aboard the ship for the traditional plaque exchange ceremony.

Disney characters and crew lined the upper decks waving to those watching the sail-in with members of the Ghostriders equestrian drill team from Houston galloping in celebration.

“The city and the Port of Galveston have made the officers and crew members of the Disney Magic feel right at home and we are so happy to be here,” Captain Olmer said.

“With these sailings, families from the central southern U.S. have the opportunity to sail from a port close to their own backyard.

“While in Galveston, families can enjoy the historic district, beaches, museums and festivals and soak up that famous Southern hospitality.”

Disney Magic is slated to sail out of Galveston until May 2013 when she will reposition to Barcelona, Spain.

Sister-ship Disney Wonder will replace Magic in September 2013 where she will sail on seven-night itineraries through to December 2013.