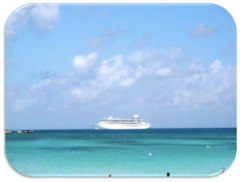 Regardless of the myriad of ports visited by cruise lines, my favourite always remains the same…a tropical island. Give me sunshine and a postcard perfect beach and I am in heaven!

Clichéd perhaps, but Norwegian’s private island, Great Stirrup Cay, in the Bahamian archipelago, really was a little taste of paradise.

After the inclement weather we had experienced thus far, the perfect blue skies were more welcome than ever…the sunshine seemed to only be positioned above us though…not that anyone was complaining! 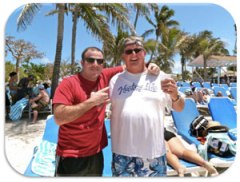 Doug and Robbie enjoy some beverages

Recently ravaged by Hurricane Rina, Great Stirrup Cay has undergone developments to bring it ahead of its former glory and is definitely well on its way of getting there.

Still partly under construction, the island is stunning. Pure white sand and crystal blue water welcomes us and there are plenty of sun lounges which is always a positive!

A variety of activities and rentals are normally available on the island but, unfortunately, many weren’t operating due to it being too windy, a claim which surprised us because it seemed awfully calm. 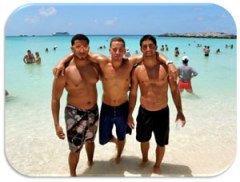 There are also usually floating mats, loungers and party floats available for rental but not even these were on offer.

I was more than happy relaxing in the water however and lying by the beach for the day with new friends was my idea of bliss after such awful weather!

It was time to get my tan on and, in hindsight; I probably shouldn’t have discounted the Bahamian sun as I actually got my burn on…my near third degree burn!

The ship organised a vast buffet lunch on the island at the Jumbey Beach Grill that was very impressive!

As well as the generic burgers and hot dogs, there was an array of salads, Mexican, Italian and Asian fare, along with a dessert buffet to rival the onboard offering! 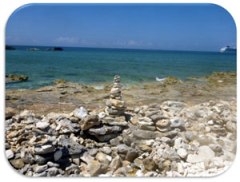 Open until 2pm, we worked our way back to the buffet several times…

Bertram’s Bar, Bobolink Beach Bar and the Lighthouse Beach Bar were fully stocked with alcoholic and non alcoholic beverages and my mid-west friends were impressed that the soda packages purchased onboard were redeemable on the island as well.

Waiters paraded the beach regularly enough that we rarely had to walk to a bar and the ability to charge to your onboard account was very handy.

Piña Coladas served in souvenir glasses buried in huge coconuts were the drink du jour and the frozen treats kept us cool on what had become a very hot day. 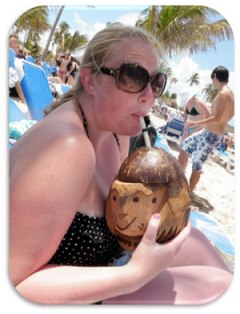 Beach volleyball was quite popular with the Miami boys and we spent some time exploring the other side of our private island which was laden with pristine lagoons and rock formations.

The mid-west kids, Mallorie and RJ, split their time between swimming, building sand castles, having their faces painted and making jewellery at the Kid’s Crew area…there might have been a few adults participating in the activities there as well though!

Cabanas on the Cay is Norwegian’s latest development on the island, which I believe will offer passengers the opportunity to hire air conditioned cabanas for the day located on the quieter side of the island, similar to the offering at Mahogany Bay in Roatan, Honduras.

The location is picture perfect and I look forward to seeing the cabanas once they are completed.

For now though, it was time to return to the ship to get ready for the famed White Hot Party on deck that night.

Whilst I’m not averse to tendering (the waiting can become tedious but I love seeing the ship from the perspective of the water below), catching one of the last tenders is 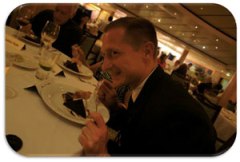 Captain Chrastina and his favourite dessert

We waited 40 minutes under full sun, actually sitting on the tender, while the crew loaded up stock from the island. I would have thought that it may have been a better idea to utilize a non-passenger filled tender for crew and supplies as it wasn’t the most comfortable of situations to be in.

Nevertheless the White Hot Party was upon us…right after I had dinner with the Captain!

Having seen “The Love Boat’s” Captain Stubing sit down to dinner with passengers on every episode of that old fave show of mine, I was longing for the day to get asked by a 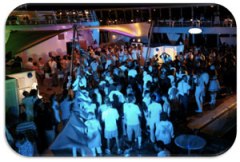 Captain to dinner myself. The time was nigh and I was suitably chuffed!

Donning my white dress (ready for the festivities following), Doug and I joined Captain Ronald Chrastina in the Palace dining room where we spoke of his time in the industry, his love of cycling and…Gloria Estefan!

Our fellow dinner guests were a debonair couple from Miami and the gentleman told us of his very diverse history in the music industry, having performed with the latin diva herself…he was even friends with Julio Iglesias!

Eclectic dinner conversation made way for a divine dessert and I learnt that refusing the Captain’s suggestion may not necessarily go down well in his books! 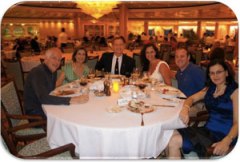 I succumbed to his favourite dessert; a melt-in-your-mouth warm brownie topped with ice cream, but might have ordered my favourite dessert, tiramisu, as well. Suffice it to say that I have never been watched with a more eagle eye to see which one I preferred.

“Regardless of what your decision, I will know the truth…mine is definitely better!”

The Captain said that he wouldn’t be joining us at the white hot party but encouraged us to enjoy the festivities as we headed to the transformed pool deck. 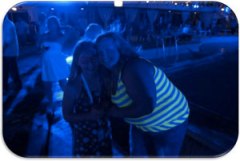 of place by the stage.

Glow in the dark white clothes lit up the night highlighting sometimes more than sun kissed skin as DJ Jean pumped tunes for passengers to “Wobble” and “Cha Cha Slide” their way through the evening.

It’s days like these that have me hooked on cruising…relaxing sunny days and party-filled nights with friends that are destined to become lifelong.

That is my interpretation of “Cruising like a Norwegian”.