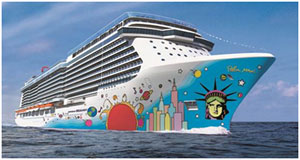 Pop icon and large-scale artist, Peter Max, has unveiled the 40,000 square foot artwork of “his” New York to appear on the hull of Norwegian’s newest build, Norwegian Breakaway.

“The artwork is a composite of New York City and cosmic imagery – the Statue of Liberty, the Manhattan skyline, a giant sunburst, planets, stars and musical notes,” Mr Max said from his New York studio.

This is the first time that the cruise line has commissioned a well-known artist to paint the hull artwork on one of their ships.

“The Big Apple is known for its love of art and its many galleries – and now, Norwegian Breakaway becomes a floating piece of art that will cruise in and dock every Saturday on New York’s West Side.”

The largest ship to homeport in New York, the 4,000-passenger Norwegian Breakaway is slated to arrive in early May 2013.