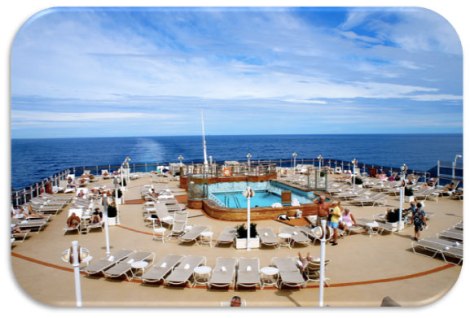 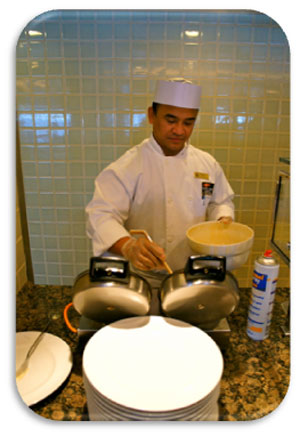 The sun glistened on calm seas as I drew back the curtain in our stateroom on our first full day aboardQueen Elizabeth.

Having had a much later night than initially anticipated, which also involved an impromptu 3am snack with my aunty in the ‘Lido Buffet’, I was up later than I wanted but had my ‘Daily Programme’ on hand to peruse over breakfast.

Heading straight to the waffle and pancake station back in the ‘Lido Buffet’, I devoured my milk chocolate drizzled delights and decided to take advantage of the immaculate weather by lying by the pool.

Taking a detour past the heritage store onboard, I picked up a few Cunard souvenirs and an ingenious ‘hands-free’ tool for reading books before slapping on a hat, slopping on some sunscreen and securing a prime position by the aft pool.

Thankfully there was no need to play sun lounge roulette as I often need to on other ships and my aunty and I enjoyed a couple of hours of pure relaxation.

The only disappointment I experienced however, was the lack of attentiveness by the roaming bar staff who didn’t seem to notice us beckoning them for drink service.

We had to walk up to the bar to order our cocktails, which I suppose is not a bad thing given what I chose to eat for breakfast, but it would have been nice

to experience the more personalised poolside service I have become accustomed to whilst cruising over the years.

Cocktail ordered, I ventured up one deck to watch a group of French passengers play shuffleboard.

With several hundred French passengers aboard the world cruise, Cunard employed two dedicated crew to entertain, translate and generally look after them.

The same was arranged for the German and Japanese passengers with the crew allocated on call 24-7 to cater to their every need.

Tempted to try shuffleboard for the first time, I did consider dusting off my out of practice French to join the group but chickened out and decided to resume my place by the pool ahead of lunch back in the ‘Lido Buffet’.

The ship was abuzz with activity with many passengers preparing for disembarkation in Sydney and I found myself take on the role of Sydney destination expert for many fellow passengers who were keen to find out what they should do in the harbour city.

Knowledge of the Queen Elizabeth suitably exchanged for childlike drawn maps of Sydney, I decided to go ‘backstage’ and headed to the ‘Royal Court Theatre’ for a behind-the-scenes tour, which came highly recommended. 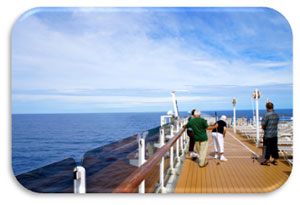 The Royal Court dancers, actors and singers were available to chat with camera donning passengers about the magic that goes into creating the onstage masterpieces that Cunard is famous for.

Rack after rack of beautiful costumes and jewellery welcomed us as we worked our way through the rabbit warren that was backstage with “oohs” followed quickly by “aahs” as passengers “exited stage left” for an hour.

Taking some time out to speak with actors Chris and Jason, I was surprised to discover that they are two of only ten actors at sea…in the world!

Delivering masterpieces by Shakespeare coupled with a more modern-day

offering by American playwright Neil Simon, the Royal Court actors are a prized bunch who undergo a rigorous auditioning process before rehearsals both on-land and at-sea to put together theatre productions that can rival the best-of-the-best on Broadway.

It was an honour to spend time with them and I was disappointed to miss seeing them weave their theatrical wand on stage during my time aboardQueen Elizabeth.

What a perfect excuse to cruise aboard the regal liner again though!

Taking advantage of the brilliant blue skies, I wandered the open decks, 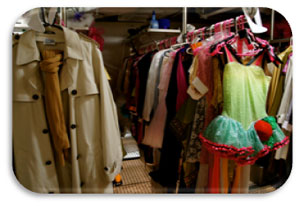 camera in-hand and enjoyed many an impromptu conversation with my fellow passengers who were more than willing to regale me with their tales of the high seas.

More than a few were participating in the ‘Soundwaves Choir’ performance that afternoon which seemed to be all the buzz and very tempting to check out.

Headed by Royal Court actor Tommi, the 120-passenger strong choir worked on seven songs over seven days and were very keen to showcase their not-so-hidden talents to a packed ‘Royal Court Theatre’. 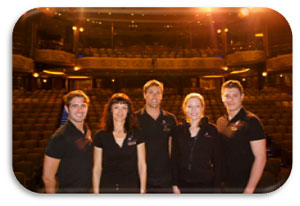 standing ovations after performing classics including “Moon River” and “Edelweiss”.

Speaking to Tommi later that afternoon, he shared his pride saying that he felt like a father seeing his children perform for the first time.

The first-time choirmaster was visibly moved by the group’s performance and it truly was a touching site to behold.

An afternoon nap was much needed ahead of formal night and I looked forward to donning my favourite bejeweled gown and heels for what looked to be a jam-packed night of catching up with new friends.

Heading to our favourite area outside ‘The Yacht Club’ I was excited to see a gathering of crew and entertainers all counting down the hours until Royal Court actor Chris’ birthday.

The excitement was palpable as Chris expressed his joy at not only the opportunity to visit Sydney for the first time but also to celebrate his birthday there.

We shared drinks and stories and, once again, I was pleasantly surprised at how a group of people I had only just met could feel like family so quickly.

I find that is always the way with cruising. You embark into this bubble (aka the ship) and experience a way of life onboard that no-one can truly understand unless they were sailing with you…on that voyage.

The stories, the fun, the excitement, the emotions… these are all

The birthday boy and I
(aka Royal Court actor Chris)

things that you only share with your fellow passengers and it’s times like that formal night, sitting with a group of such interesting and inspiring people that you remember most when you return home.