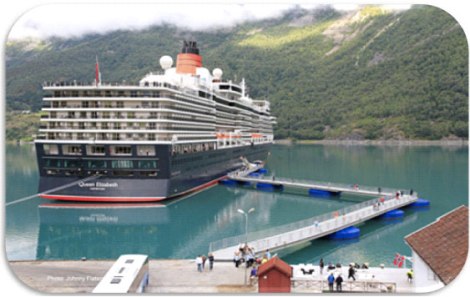 Cunard’s 2,068-passenger Queen Elizabeth was the first cruise ship in the world to trial a motorised, floating pier when she called into Skjokden, Norway recently.

At 720-feet long and 15-feet wide, SeaWalk is equipped with two 250 HP azimuth thrusters and unfolds in a zig zag from shoreside to the cruise ship, removing the need for tendering when ships are berthed offshore.

With the ability to offload over 4,000 passengers in an hour, Cruise Critic reports that the SeaWalk can also operate comfortably in one to two metre swells all for less than half the cost of a permanent dock.

The first of its kind, the company will not comment on which tender ports have expressed an interest.

Which tendering ports do you think the SeaWalk would be best suited to?