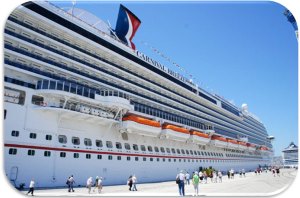 A mere several hours of sleep (albeit in a ridiculously comfortable bed) does not make one look forward to a self tour of a new city, but Marseille was calling and I was determined to put those French skills to the test for my last day in France for this trip.

Docking approximately 20 minutes from the centre of the city, shuttle 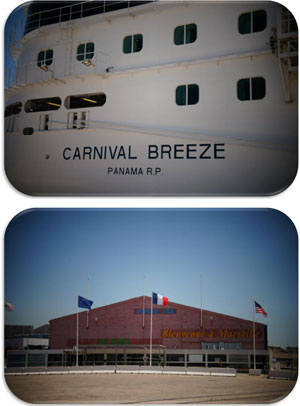 buses were provided for 12 euros return to ensure that passengers who had not booked a shore excursion, had affordable access to all that Marseilles had to offer.

Leaving the air conditioned bliss to step into the heat of the French sun was divine and I spent some time losing myself in the city.

Perusing the shops, I noticed that the sales were on and this cruiser had to tear herself away knowing full well her luggage limit had been well reached!

People watching and spotting little French gems including a lone carousel by the flower market, made the morning pass by swiftly.

All in all though, I regretted not selecting a shore excursion as there was little to do in this seaside city apart from eat and shop and goodness knows, I had done enough of that already. I headed back to the ship via the shuttle buses which, by this time, were attracting crowds of Carnival passengers and anticipated an afternoon of lying by the pool.

My cruising buddy was expected back soon after her shore excursion to Arles and Aix en Provence and I was keen to debrief over a Caribbean colada.

Cocktails in hand I hear all about the

blissful day she had walking in the footsteps of Vincent Van Gogh, through the Cours Mirabeau and visiting the Romanesque St Trophime church.

Day slowly turned into night and we anticipated our dinner at Fahrenheit 55 Steakhouse (USD$35 per person)…perhaps that Guy Fieri burger at 3pm was a mistake!

Taking our seats after perusing the menu earlier that evening on the television in our stateroom, we are faced with a really difficult decision…what will we order from this extensive and thoroughly delectable menu?

I settle on the escargot and am pleased that they can provide the lobster ravioli as a starter as well.

Service is surprisingly prompt considering there were so many people dining and the staff are so well versed in all things relating to the food and wine on offer, I feel like asking them to pull up a chair to fulfill my epicurean fascination with the menu.

Whilst the escargot literally melts in 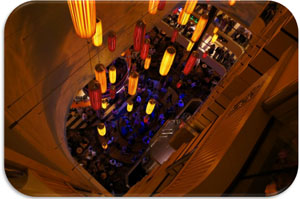 View down the atrium from deck 9

my mouth, the lobster ravioli is too al dente for my liking and I’m disappointed to find that the filling is much blander than I expected. It does mean that I have more room for the most extravagant surf and turf I have ever had the pleasure of sampling however.

The filet mignon was seared to perfection in that medium rare way and the broiled lobster tails slide out of their shells as the ultimate accompaniment.

Creamed mash potatoes whipped to a smooth puree set off the dish but I am so full I barely touch them and can’t even bring myself to peruse the dessert menu.

I eye off the neighbouring table’s ‘taster’ plate that is such a generous serving it seems as if it would feed four people instead of one, but even their groans of delight can’t entice my stomach to accept more food!

Silently making a promise to return before the end of the cruise to work my way through the other dishes I sadly had to avoid ordering, Michelle and I head to experience American comedian Mutzie in the Punchliner Comedy Club.

Packed to the rafters, the club truly invokes a New York-style lounge and Mutzie quickly has the audience in hysterics as he begins to involve those sitting near the front in his adults-only comic antics.

Keen to fit in as many shows as we can in the one night, we race to the Ovation Theatre at the front of the ship to catch our first Playlist Productions show, ‘Latin Nights’.

Having heard about the high calibre of performers aboard Breeze, along with the state-of-the-art production value, I was interested to see if the show lived up to the hype.

The seven strong group of performers not only salsa’d and shimmied their way across the stage but they managed to belt out tunes by Latin legends including Gloria Estefan and Enrique Iglesias effortlessly.

No Britney Spears-esque lip syncing here and no back up dancers to alleviate the effort made to transport the audience through song to a bona fide latin fiesta…absolutely every one of those amazing performers sang and danced their way through the show.

Impressed is an understatement…

The crisp clear high definition screens and simple, yet elaborate sets further enhanced the production with Michelle and I feeling like we were witnessing a performance on Broadway.

DJ Alx took centre stage as he used  his spinning skills to whip the audience into a frenzy before the cast danced down the aisles into the atrium to entice passengers to join them in a celebration of all things Latino.

What started as a quiet lobby was quickly turned into a fiesta with passengers not only filling the dance floor, but also lining the staircases on three decks to shimmy and shake to the beat.

I have never seen anything like it on a cruise ship…the transformation of that lobby within minutes is another testament to the success of the enhanced music and entertainment line up aboard Carnival’s newest ship.

My luscious bed was calling my name though, so, whilst tempted to party the night away again, I decided instead to practice my shimmying skills all the way back to my cabin.