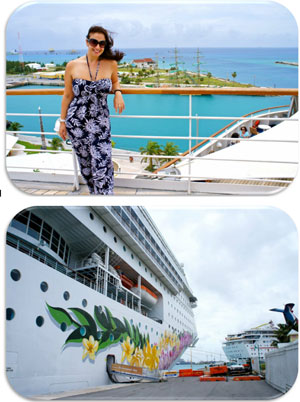 Being a fan of spending time onboard a ship when sailing, I selected our first port of call, Freeport, Grand Bahama Island, to relax on deck and get to know the Norwegian Sky a little bit better.

Freeport is very much an industrial port in the Bahamas, so it seemed quite fitting to just have a stroll around the port and straw market rather than venture into town or on a shore excursion.

The port offers inexpensive wifi, souvenir shopping (including a Harley Davidson store) and several bars for those passengers who want a change of scenery from the usual bars

Back on the ship, a full day’s activities are planned including ‘Name That Tune’ and the ever-popular crowning of ‘Miss Norwegian Sky’.

Passengers gathered poolside as a group of women showed off their ‘assets’ to a judging panel of eager men, with the hope to receive the coveted crown.

There was a talent component (read: the opportunity to jiggle and writhe for the judges) and the fashion parade (read: coming up with the best way to rip your towel off provocatively) as the crowd whooped, cheered and

sometimes grimaced their way to the end of the competition.

All in good fun, Miss Norwegian Sky was crowned and we were relinquished to get ready for an elegant casual night at sea.

While Doug tried his luck at ‘Deal or No Deal’, I join my new Aussie friends Izzy and Jarrod for dinner in the main dining room, the Palace.

It’s always such a novelty to hear the Aussie accent aboard a ship overseas and my newfound friends and I relish in our Aussie-ness and small world stories over a delectable dinner.

The night is very young though and Stardust Showtime beckons us with the electrifying “Get on Your Feet” – the Gloria Estefan tribute show.

Whether it was the cocktails or actual skill, the talented and energetic Elvy Rose with JC Crazy and the Bomba Band have Izzy and I out of our seats and salsaing like we’ve never salsa’d before.

Elvy gives Gloria a run for her money and my newfound friends and I are keen to showcase our latin dancing at Dazzles Nightclub.

Not before ‘Dancing with the Sky Stars’ though, a very popular game where passengers join the cruise staff in a parody of the television show.

The not-so-graceful participants let it all hang out in the show that has Dazzles Nightclub packed to the rafters and everyone in hysterics before taking to the dance floor themselves with DJ Mike Sincere.

Every year I head to the USA there is something I learn..a new modern line dance.

Two years ago it was my favourite, the “Cha Cha Slide”, last year was the “Cupid Shuffle” and this year…”The Wobble”.

A group of vivacious gals from New York show me the steps to “Wobble” my way across the dance floor with as much style as I could muster…one thing was certain, I would have this perfected by the end of the cruise!