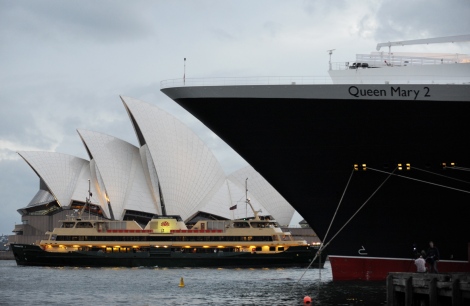 Cunard’s Queen Mary 2 berthed at Circular Quay’s Overseas Passenger Terminal (OPT) for the first time today when she returned to Sydney marking the end of her inaugural circumnavigation of Australia.

Made possible through the installation of a new anchoring point by Sydney Ports Corporation allowing larger ships to port at the terminal, Carnival Australia CEO Ann Sherry says the move further confirmed that an upgrade to OPT is an important element in improving Sydney’s ability to cater for additional cruise ship visits.

“Queen Mary 2 at the Overseas Passenger Terminal will be a glimpse of the flexibility and growth that will result from Sydney Harbour having appropriate port facilities to support the industry’s increasing economic contribution,” Ms Sherry said.

The largest ship to ever visit Australia, QM2 will stretch 345 metres along the foreshore at Circular Quay and will rise 62 metres above the waterline a mere five metres below the highest sail of the Sydney Opera House.

Ms Sherry shared her belief that the berthing situation during ‘wave month’ was not ideal, in a statement released today.

“While Queen Mary 2’s use of the Overseas Passenger Terminal adds a new chapter to Sydney’s maritime history, the harbour still needs a ‘three berth solution’ with one berth west of the bridge and two in the eastern harbour including shared use of Garden Island during peak periods.”

“During the current cruise season, a number of cruise ships have had to moor mid harbour because they were too big to sail under the bridge and no suitable berth was available. Having to be ferried ashore on tender vessels is not the welcome to Sydney international visitors would expect.”

The QM2 returned to the harbour city today carrying approximately 2,500 passengers and 1,200 crew for an overnight stay, before continuing on her world voyage.

Speaking to media in Sydney last week, Cunard president and managing director Peter Shanks attributed the unique arrival of the line’s flagship into Sydney on Valentine’s Day as being responsible for an increase in sales for next year’s circumnavigation of New Zealand.

“As a result our sales over the last 2 weeks have been phenomenal for next year’s round New Zealand voyage,” Mr Shanks said.

The very public marriage proposal showcased the QM2 to the world in a different light according to Mr Shanks, who believes the move highlighted the flexibility and modernity of such a classic cruise line.

The liner has reportedly received a rousing warm welcome in each port she has visited during her inaugural circumnavigation of Australia with passengers onboard made to feel like celebrities with each arrival.

“It gives the guests onboard a sense of feeling special because people are coming to look at them and they’re on the Queen Mary 2,” Mr Shanks said.

Cunard’s grand dame will return to Sydney on 7 March 2013 ahead of her highly anticipated circumnavigation of New Zealand.